I know that I have made it very clear that SmashBurger is our favorite burger chain. On the rare occasion that my husband or I want a delicious burger just the way we want it we don't even think or discuss where we want to go. The answer has always been Smash!

This Memorial Day we wanted to have a fun evening so we planed a picnic! We would go to SmashBurger and get our order to-go and head to the coolest park we could find. I knew thought our daughter would have a blast and my husband and I would enjoy to food.

I'm ashamed to say that I have been to SmashBurger a few times so I don't even have to think about what I want. I just know that I want the BBQ, Bacon and Cheddar burger. It comes with exactly everything I would add to my own burger if I were to "build my own". The burger comes with BBQ sauce, bacon, cheddar cheese and haystack onions (my favorite)!

My husband was excited about the Avacado club and thought he'd give that a try. They asked if he wanted a whole wheat bun or the regular egg bun. He asked for the egg bun and added cheddar cheese.

We were excited about this! We have always had the best service with the highest quality at SmashBurger so I didn't even think to check our food. I should have. When we arrived at the park and had thrown out our blanket we sat down anxious and eager to dig in to our American meal! I opened up my burger (I always eat a few haystack onions off the top because they give me so many and they are so good)! I was not only unhappy with what I saw but I was in pure shock. 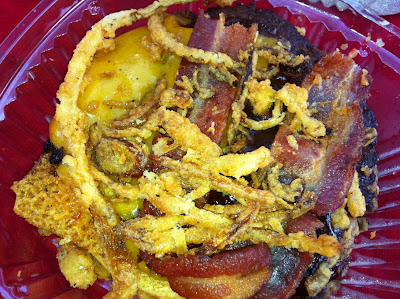 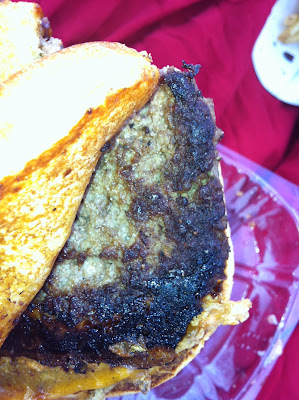 At first glace I noticed that my hamburger patty was black so I peeked from the bottom. I was amazed that they would serve someone a hamburger that was as black as mine was. My husband was half way done with his burger by this point and he had been complaining that it was the driest burger he's ever had. Now I understood why!

As I looked at all the things that were wrong with my burger, this is what I noticed:


So, as you can tell I was left with what I thought was a pretty un-edible hamburger on my Memorial Day picnic with my family. My daughter and I nibbled on the Smash Fries I ordered. They too were the worst I've had at SmashBurger but at least they were edible. Not to be too nit picky but my husband's burger (remember he ordered the egg bun rather than the whole wheat?) came with the whole wheat bun. He was a little annoyed.

Overall we were 100% dissatisfied with our SmashBurger experience. My husband called that particular store to talk to the manager and the girl said there wasn't one. He asked for the owner's phone number. She said they were corporate owned. He asked who he should talk to about a complaint and she said corporate. So today, that is my plan. I'm going to contact corporate.

After our sit down dinner with Tom Ryan at the Boulder SmashBurger grand opening a couple years ago, I felt like I had a clear understanding of what SmashBurger stood for. He explained that his vision was to create a place that was better than McDonalds but faster and more casual than Red Robin. He wanted a place that was sophisticated enough for a date but fun enough for family night. I admire his vision and find his plan to be perfect. I can't imagine what he would say to the workers at the store we went to last night. I can only imagine he too would be appalled. As my husband said "we would have been better off eating McDonalds".

Hours after posting this review and emailing corporate I received a phone call from Greg Creighton, the COO of Smash Burger. He had called to apologize for the "horrific experience" we had. He explained that the Wheat Ridge location had a "faulty grill" and that it was being replaced as we spoke. He also offered to do what he would do for any customer who had a horrible experience, which is to offer a gift card. (As a side note, I'm confident that at other locations they would be willing to offer you a new burger if you received one that wasn't worth eating)

I am not surprised by the awesome response of Smash Burger corporate. Like I've said, Smash Burger offers quality food and quality service which is why we are proud to call it our favorite burger chain. I just hope that along with their new grill, they have chastised the cooks who put together that atrocious burger! A faulty grill is no excuse for such horrible assembly or for serving burnt food.

While I'll probably never visit this location again, we will of course visit another Smash Burger soon to hopefully enjoy the amazing burger I've been craving!

Past Reviews of Smashburger:

The Smash burger in Englewood has only served us excellent food! Since our experience at the Wheat Ridge location we go out of our way to go down to Englewood. This is what you should expect from Smash burger: 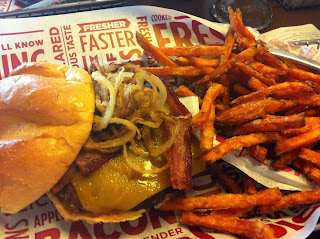 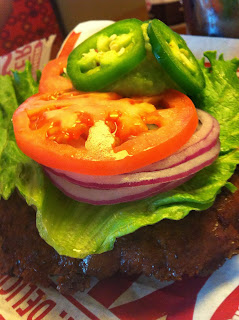 Posted by ColoradoCritics at 10:26 AM