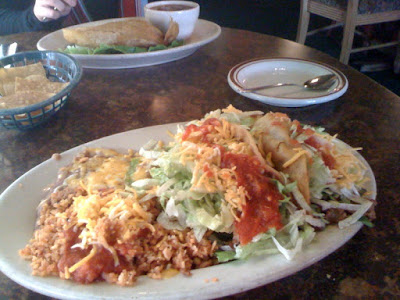 As you might have noticed, we LOVE Mexican food (I should add, good and authentic Mexican food). We saw this place and had to stop in and grab dinner. We were pretty hungry and the thought of some good Mexican made my mouth water.
It's called Alamos Verdes and is located at:
5304 Vance St
Arvada, CO 80002-3720
(303) 422-5528
We ordered one of their Tamale Rico which is large enough to be a one person meal on it's own. We also got a plate that came with a burrito a taco and beans and rice.  The beans were pretty tasty! I enjoyed nibbling on them quite a bit. The beef burrito was covered with so much lettuce that  you couldn't see the burrito!!! If I had ordered a burrito salad I would have been thrilled! Since I ordered a burrito, I was much less than excited with the high pile of cold leaves on top. It was decent tasting and large. The taco that came with it was served in a crispy fried tortilla. Very un-authentic. Very fried tasting. The filling was good though.
The tamale was pretty average as well. I enjoyed it the more than the burrito. I'm going to have to say that the beans were the best tasting of all the dinner. That's pathetic really but they were quite tasty!
We discussed our review, concluding that it was decently priced but very very Americanized. The pricing was average. We came out spending about $20 total. As we finished our discussion our waitress brought out our bill and the refreshment. My husband and I looked at each other and said "No we're talking"! Gary even said "This just bumped it from  average to cool".
They brought tiny scoops of orange sherbet. It was a great and refreshing end to our meal. 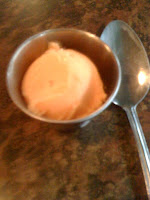 Posted by ColoradoCritics at 5:18 PM