Tonight we planned on going to the Cheesecake Factory but due to weather we had to stay close to home. We drove around the area with our iPhone (using Yelp) and found Queen of Sheba Ethiopian. It's a quiet little hole in the wall off of Colfax in Denver. There is just one lady there who runs the whole place alone!

There was a group of about 10 people who had arrived just before us so we were there for a total of 2 hours from start to finish. I can't complain about that either, knowing that the amazing woman was all alone making dinner for 13 people!

Our dinners came after about an hour of waiting. Like I said, we were fine with it since it was just one woman working. Our plate had a few different items and included a bread to eat them with. See, the trick to Ethiopian food is that you can't eat it with utensils, rather you use bread to pinch the food with your fingers.  The veggie plate was similar. It came with a few items and bread to pinch the food with.

At first the food was yummy. The bread seemed decent and the meat items were good too. After a few bites I noticed a bitter or a vinegar like after taste. My husband and I noticed it at about the same time. We decided it was coming from the bread and soon my husband found himself using his fingers to try to finish the meal.

Our guest, who is a vegetarian and ordered the veggie combo, loved his food. He did mention a couple of times that he didn't like the fact that he couldn't tell what he was eating (my husband and I had the same challenge). He did enjoy his food quite a bit and even liked the bread it came with. 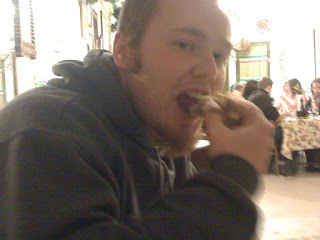 (My husband eating the food!)
None of us could finish our plates, so the portions are large. The plates are on average 8-9 dollars or $15 for a one person combo and $30 for a two person combo. I enjoyed the authentic atmosphere, but like I said, it's a little hole in the wall restaurant.
Overall, we found that we really don't like Ethiopian food. We'll never again eat Ethiopian cuisine. However, the woman was very kind and I'm sure if you like Ethiopian food, you'll find hers to be delish. As for me, it's overpriced and hard on my taste buds. 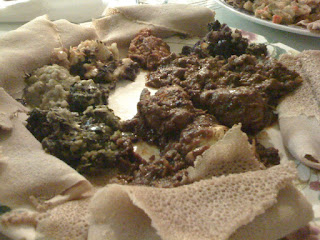 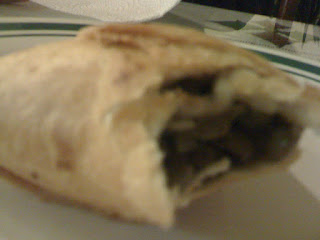 Posted by ColoradoCritics at 11:40 PM