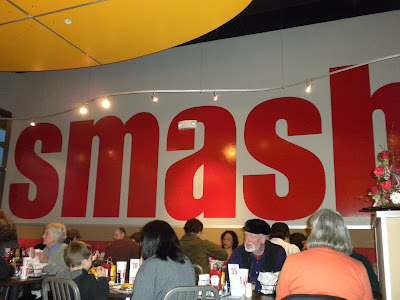 I had the opportunity to attend a VIP (or sneak peak) event for the new Smashburger in Boulder. I was really excited and honored to receive the invite! When we arrived I was pleasantly welcomed by one of Smahsburgers PR representatives at the door. She quickly chatted as I looked around the room at the overwhelming amount of people in attendance. When I saw Richard Gere, from Runaway Bride I thought "Wow this really is a big event!". Julie, the PR rep waved him over. It wasn't Richard Gere, it was Tom Ryan! The founder and Chief Concept Officer. He was busy but promised to come chat after we got seated with our food. 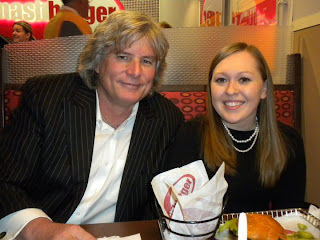 (Does he not look Richard Gere?!)
When we went up to order we obviously had to yell to get our order in over all the excitement. We all three ordered the Colorado Burger in honor of it's new appearance on the menus. We've wondered when this burger would come into creation and were more than thrilled to hear that a Colorado Burger had made it to the menu. Each of us ordered a different side. I suggested my sister-in-law order the Haystack onions since they are my favorite! I had to try the Sweet potato fries; also delish. And my husband tried Smash fries; best fries in the whole world! Plus! The burger's here are perfectly seasoned, cooked to perfection, juicy, messy on a fresh flavorful bun! Which by the way, come in different flavors!

My personal favorite is their Create Your Own. I like the 1/3 lb burger on a egg bun. I add BBQ sauce and haystack onions as well as grilled onions with their sharp cheddar cheese. Basically, I wish Colorado would trade burgers with Utah but hey, I can create my own so I'm ok! 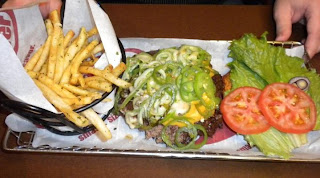 (Smash Fries and the Colorado Burger) 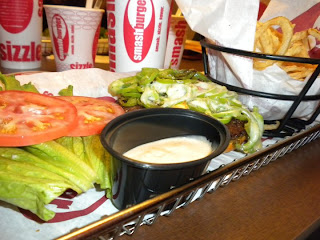 (Colorado Burger and Haystack Onions with their sauce) 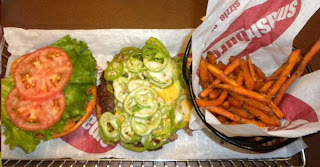 (Colorado Burgar with their garlic seasoned Sweet Potato Fries)
The new Colorado Burger is unique as well as carefully planned out. After a few deliciously cheesy yet peppery bites, Tom Ryan came and sat down next to me. He was kind enough to talk with us for a good ten minutes. He explained the process in designing this new concoction.

He and my husband talked more about the business side of things. We asked Tom why he started Smashburger in the first place. He explained that he was the Chief Concept Officer of McDonalds and found that millions of people were eating the food but were not happy with it.They eat it simply because it's there. His plan was then to create a restaurant that is cheaper and faster than a sit down place but nicer, better and fancier than fast food. I think he hit the nail on the head! 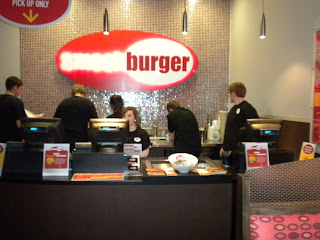 Smashburger has a modernized yet cozy feel to it. The customer service is simply the best I've seen at any burger restaurant. You truly get fresh, high quality food and the best service. You feel great when you leave, knowing you got a good deal and were treated right.


The number one thing I admire most about Smashburger (other than their amazing food) is Tom Ryan's effort in giving this national chain a home town feel in each of it's locations. They even created a burger just for Boulder (a burger made of black beans rather than beef)! I'm really excited that Smashburger is growing so rapidly and even more excited that they are now in Boulder. They are going to LOVE this home style burger joint.


Check out Smashburger and even order online!

Posted by ColoradoCritics at 2:31 PM