I had the joy of trying Red Lobster as a special Valentines treat this past Saturday. I was excited but nervous of being disappointed after years of anticipation and wonder about this sea food chain restaurant.

We we're on a budget of $40 including tip which limited us a little. We obviously couldn't order a lobster but we found some great options to choose from. I ordered Crab Alfredo with Shrimp Scampi. My husband had the Shrimp Alfredo, Walt's Favorite Shrimp and Shrimp Scampi. While I would have preferred us to order completely different items, I was so in love with the Shrimp Scampi I was thankful we didn't have to share. 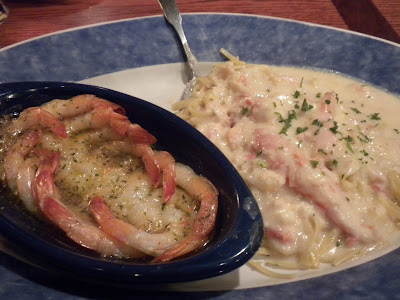 The Shrimp Scampi was by far my favorite dish of all time. The rich garlic butter mixed with the shrimp was perfection. I would certainly go back to Red Lobster for that dish alone. I also really enjoyed their snow crab legs which is served with a salty, creamy melted butter to dip in. 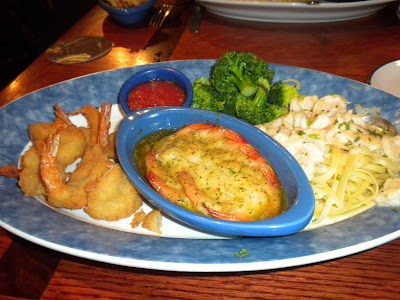 Overall I was incredibly impressed with Red Lobster. I was pleasantly surprised when we were served the most delicious cheddar biscuits. Our salads were great too. I felt silly ordering french fries as a side to my sea food but even their fries are good (especially dipped in the Alfredo sauce).

The service was wonderful. We met with the franchise owner who seemed to be on site often. He has owned the Flat Iron location since 2001! I highly recommend stopping into Red Lobster for any occasion. I know I'll be back as soon as I can!

Posted by ColoradoCritics at 11:35 PM