My husband and I were invited to attend an event put together by Buick a couple weeks ago.  As a food writer I first found it a bit odd to be invited to a food event by Buick but my husband, who used to work in marketing, helped me understand.  Buick and Food and Wine teamed up and hired exquisite, nationally renowned chefs to do live demonstrations to draw people in.  As part of the event, they would also have guests test drive a Buick of their choice.  It's a really great idea!  I never would have test driven a Buick had I not been there for the food!
The event was called the Buick Discovery Tour and was held in downtown Denver at the Four Seasons.  We pulled up and the valet took our car and we were directed up stairs to sign in and snack while waiting for others to arrive. 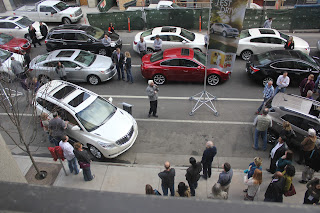 Once it was time to start they directed the three groups to their own starting point.  We got to start off test driving the cars.  I loved the presentation! I looked out the second story window and noticed the entire block was filled with shiny, clean, new cars. It took me a minute to realize that they had closed off a whole block in down town Denver on a Saturday evening just for the car line up! It was an impressive site. We walked down stairs and out to the street. All the cars were already running with a representative inside waiting to guild you on the drive and tell you all about the car you chose. Since we have our second child on the way, my husband asked to test drive a full SUV (for me) or their sport car (for himself) . We were taken to the Verano Turbo, which is neither their sport car or an SUV. In fact it was pretty compact. I'm not sure if it is a "compact" car but it sure seemed like it! The interior was neat. I liked that it it had a heated steering wheel and apparently the front seats are heated too. As previous Audi owners there wasn't a lot to be impressed about. If we were interested in a compact Turbo we'd stick with our Audi A4. In any case, I did realize that Buicks are no longer your Grandma's car. They look nice and they are luxury cars which I was unaware of so I did learn something new! 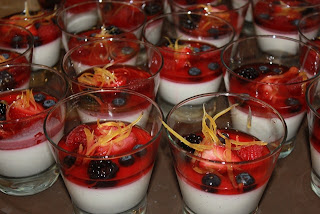 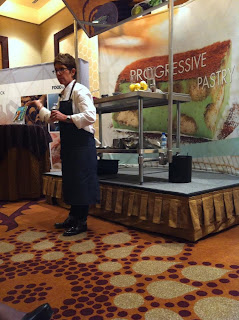 Next we got to go back up stairs to watch the demo with Hedy Goldsmith. She was my favorite to listen to. She told us about her life growing up with a mother who didn't cook. She explained how she was introduced to baking when she received an Easy Bake Oven! Hedy is energetic, fun and creative. I love that she's not afraid to use unique ingredients in her food. For example, she made us a Basil Panna Cotta with Strawberry Consomme. It was so good! The fresh basil didn't taste like traditional basil. Paired with the sugar and cream it took on more of an earthy taste that really made the dish feel fresh and airy. I think the Strawberry Consomme was my favorite part though. It was delicious! 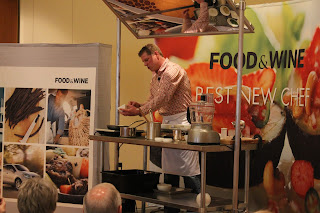 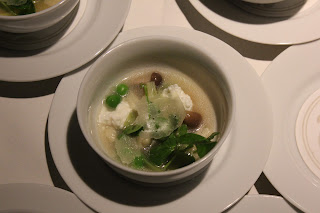 (Photo credit for this photos goes to Intersport)
Next we went in with local chef, Alex Seidel. Alex runs a farm here in Colorado which he says is "Colorado's First Artisanal Sheep Dairy & Creamery". There they raise sheep which are milked to create dishes at his restaurant, Fruition. He showed us how to make Cavatelli Pasta with English Peas, Foraged Mushrooms and Cacio Pecora Broth. It was fascinating to listen to him and realize that there is a restaurant here in Denver that owns a farm, raises sheep, breads their own lamb and makes their own cheese! I just can't believe all the work that they themselves put into each dish they serve. It's incredible! 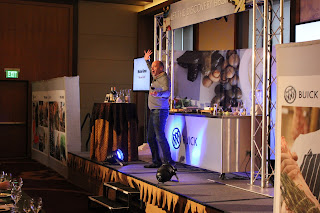 After the three stations the three groups came together in a large conference room. We were greeted by a Buick representative who then introduced us to Michael Green. We don't drink wine but apparently he's a wine genius! He spoke to us with much enthusiasm about wine pairings. He explained how different flavors will complement or ruin a wine. He was quite a character! My favorite part (since we didn't drink the wine) was eating the Lindor chocolate! 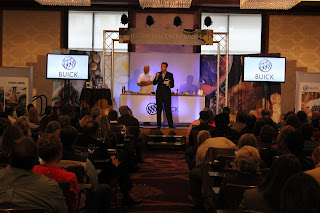 Finally, we were introduced to New York chef, Michael Psilakis. We were looking forward to his presentation since Greek food is one of our favorite cuisines! He shared a little back story, explaining how he was first an accountant and became a chef on accident. I love the family history that he shares in his book too! This guy is not only a great chef but he loves food and he loves his family and I appreciate that! 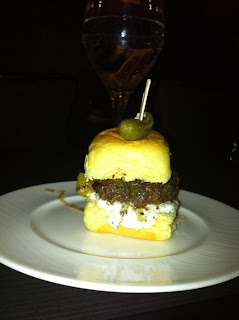 He made us Gyro Spiced Sliders. You wouldn't believe the flavor one little slider can pack! It was the most amazing food experience I have had in a long time! I could have eaten a second, maybe a third. This guy is a food genius.

As the event came to a close we were given a signed copy of Michael Psilakis' book How to Roast a Lamb: New Greek Classic Cooking. I love collecting cookbooks so I really appreciated his gift to us!

We had an excellent night at the Four Seasons attending the Buick Discovery Tour! I learned a little about Buick and a lot about food. If you ever get an invite don't hesitate to accept! It was a lot of fun!
Posted by ColoradoCritics at 12:33 PM