Update: When we sent this awful review to Country Buffet's PR they responded. Apparently this is one of their best locations. If that's true the other locations must be awful! I didn't even know what to say with that response. Honestly they would have made themselves look better by not responding at all.

We were invited to go try the new and improved Country Buffet this week. We decided to go on Thursday night which is now in the top 5 stupidest decisions I've ever made. Don't go on Thursday! Apparently kids eat for $0.99 which means everyone in town goes out for dinner to save a few dollars. This alone confuses me. The line to get in was between 30 minutes and an hour wait. I'd rather just pay the extra couple of dollars and not stand in line. If I had known what was to come, I would have just gone somewhere else and come back another night.

After waiting longer than we have ever waited to get into any restaurant, we finally made it to the counter and were seated. I was impressed with all the food options! They also had a lady making balloon animals and another making cotton candy! How fun?! I especially loved the extensive drink buffet that includes an Icee machine, milk, chocolate milk and two of the new computerized soda machines that allow for endless possibilities. 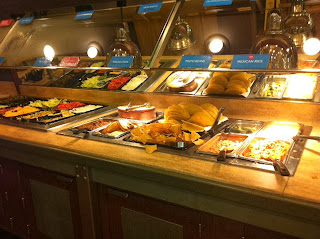 They have a taco bar with all your typical toppings. There are jalapenos, cheese, salsa, corn chips, tortillas and what my husband described as "home made tasting ground beef". Since Country Buffet's new thing is "it's not like it's home made, it is home made" we were impressed it seemed to be true with Gary's taco. 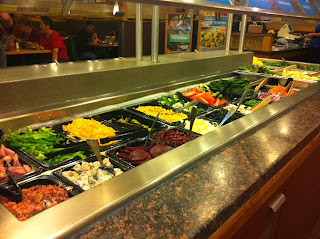 Like any buffet there is a salad bar with more salad toppings and dressings than you could ever want! They have a bread bar with two kinds of rolls and two buckets (yes buckets) of honey butter. Sadly the presentation was lacking so much I didn't have the desire to even give a roll and butter a try.  The pizza bar was also quite unimpressive. If I may throw them a piece of advice here; I would place the two pizzas next to your two plates of rolls on the same buffet table to make a more impressive, less skimpy looking presentation. I really was quite shocked that the two skimpy tables even existed. It just made me feel like they were missing their other 4 trays of pizza. Maybe they were! It was a busy night!

I tried a bite of most food items to help write a more thorough review. I didn't like most of it. The corn dog I was feeding my toddler was under cooked with oozing dough seeping out. The riblit was only gristle and bone so I just set that aside. The macaroni and cheese and corn were both colder than room temperature. She ended up just eating of my husband's plate because she was in love with the country fried steak and gravy. 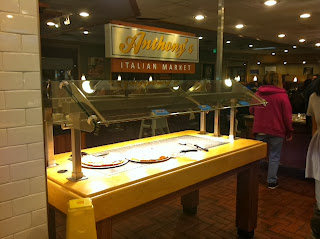 I post about pizza more often than any other food I think. I love it so much, I'll even eat a Totinos pizza if that's the only pizza option I have. I didn't even want to eat the pizza that was offered here. It was flavorless and it wasn't even warm. The only options were cheese pizza and pepperoni, which was out until we were walking out. That might have been fine if they didn't have a whole buffet table just for pizza! 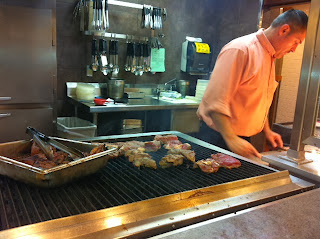 The grill was a really neat idea! I love that there is a cook behind the counter ready to cut you off whatever meat you'd like. It gives you a feeling that you are getting fresh, hot meat. In our case this wasn't true. Gary loves his steak medium and even medium rare will work if that's what he is offered. The steak he was given was flat out rare. It was cold, red and I would go as far to say un-safe to eat. The huge ham they had cooking looked like it could be great but I wasn't willing to try it after my husband's uncooked steak.

I'm pregnant which means I have to be really careful of what I eat. One bite of rancid, under cooked or unpasteurized food could be detrimental to my unborn baby. I understand you take a risk anytime you eat out and I almost always say a little prayer that the food I'm eating wont make me sick. My experience at Country Buffet made me seriously concerned for my whole families health. I expected us all to have stomach issues the next day. The cold food, under cooked side dishes and uncooked meat really had me concerned.

I really wish I could have given Country Buffet a good review. Everyone loves a good buffet, home style cooking and the balloon and cotton candy making were awesome! I love the effort put into making the experience fun for kids. Unfortunately the food and cleanliness took away from the experience. The whole restaurant was a disaster. I saw a couple "clean" plates that still had food on them. There was a mountain of soft serve ice cream sitting under the ice cream machine for a good half hour for goodness sake! Food was everywhere. The ice cream topping containers each contained random bits of food rather than what was intend to be served in them. The milk machines didn't work or didn't have milk. The soda machines weren't working properly so the sodas all tasted like slightly flavored carbonated water. It was just over all bad! 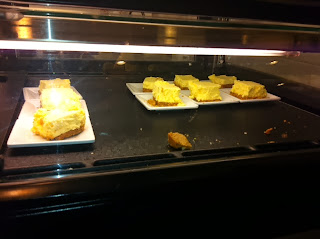 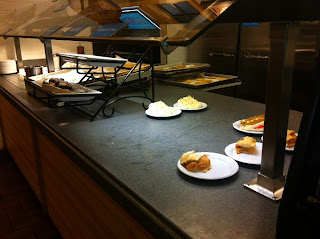 I will say their pumpkin pie was really tasty. I meant to only eat a bite but I ended up eating half the slice. The snicker doodle cookie I had really did look home made and it was delicious! The second corn dog we tried eating ended up being fully cooked and tasted alright. Gary loved the country fried steak. The Icee machine miraculously pumped out perfect Icees all night long. The salad bar was fine. There were plenty of things that were fine but overall our experience was bad enough that we'll probably never go back.  My biggest suggestion to perspective customers is this: Don't go on a Thursday! My hope is that our disaster of an experience was due to the fact that it was insanely busy that night!

Posted by ColoradoCritics at 10:42 AM